The inspriration and collective organisational abilities of Sarah’s close-knit school mum friends and her work collegues made the local newspapers. 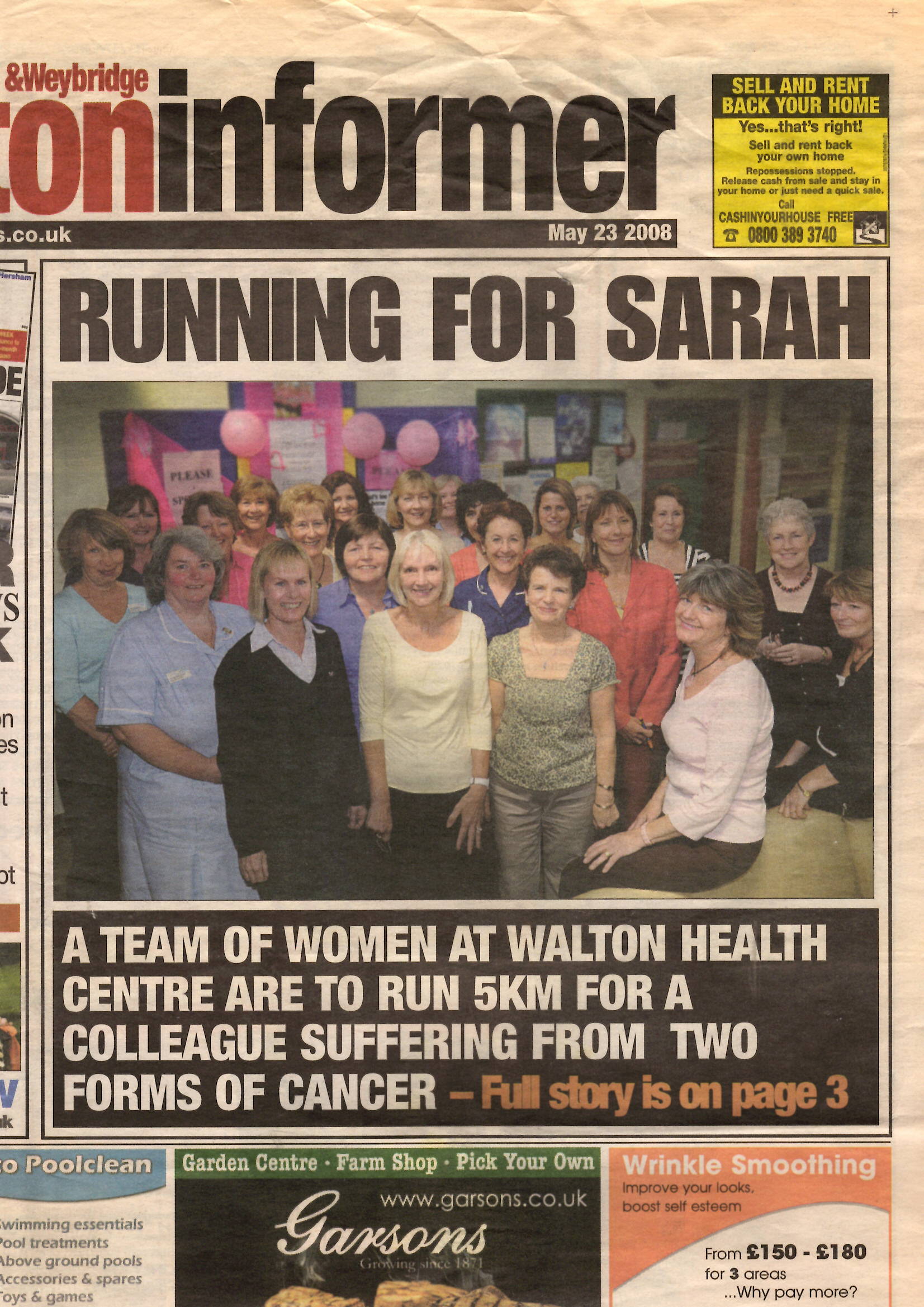 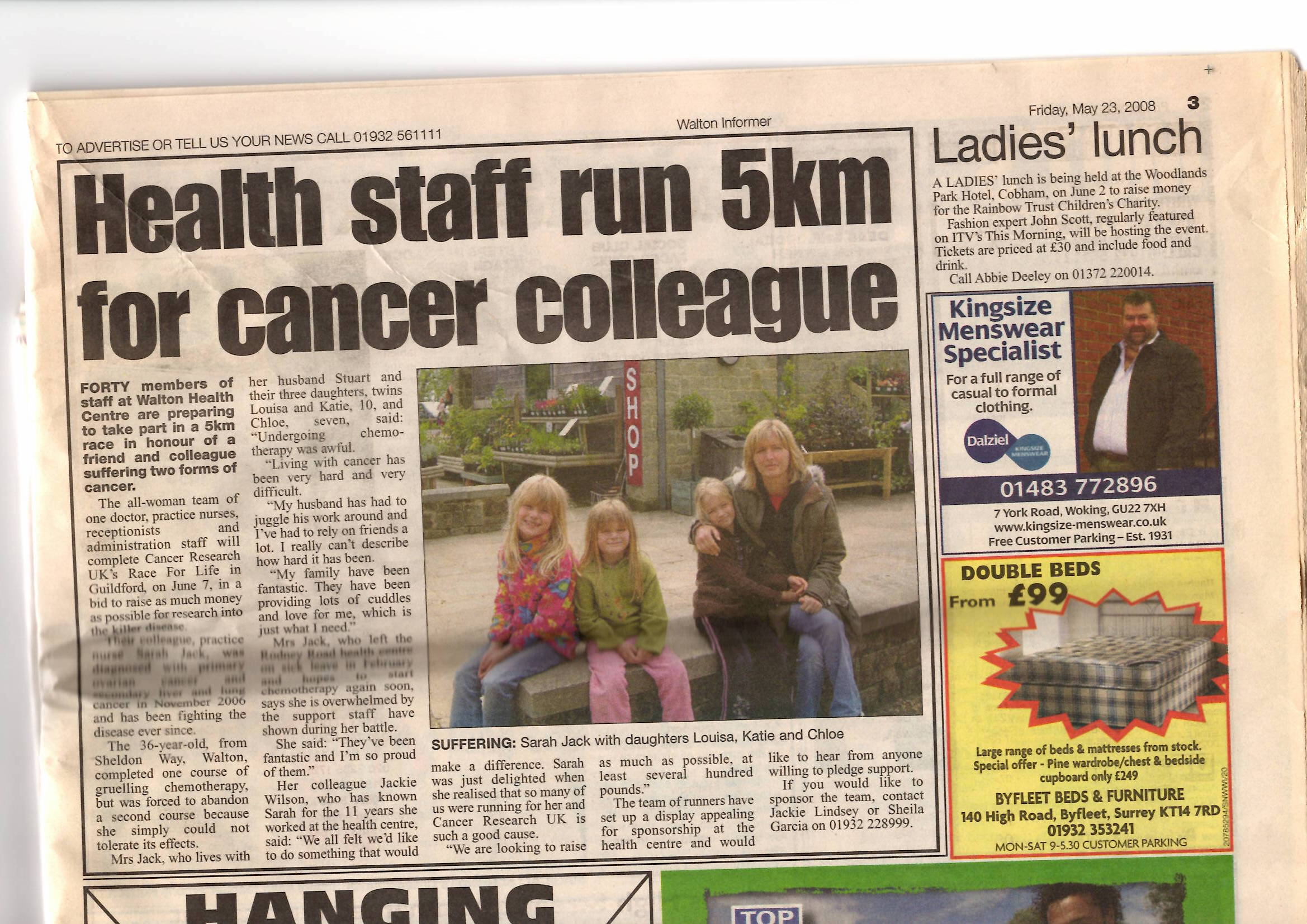 The inaugural Pink Party, held in December 2008 was the first of many cancer-fund raising events put together by the newly formed CRUK Walton On Thames committee. 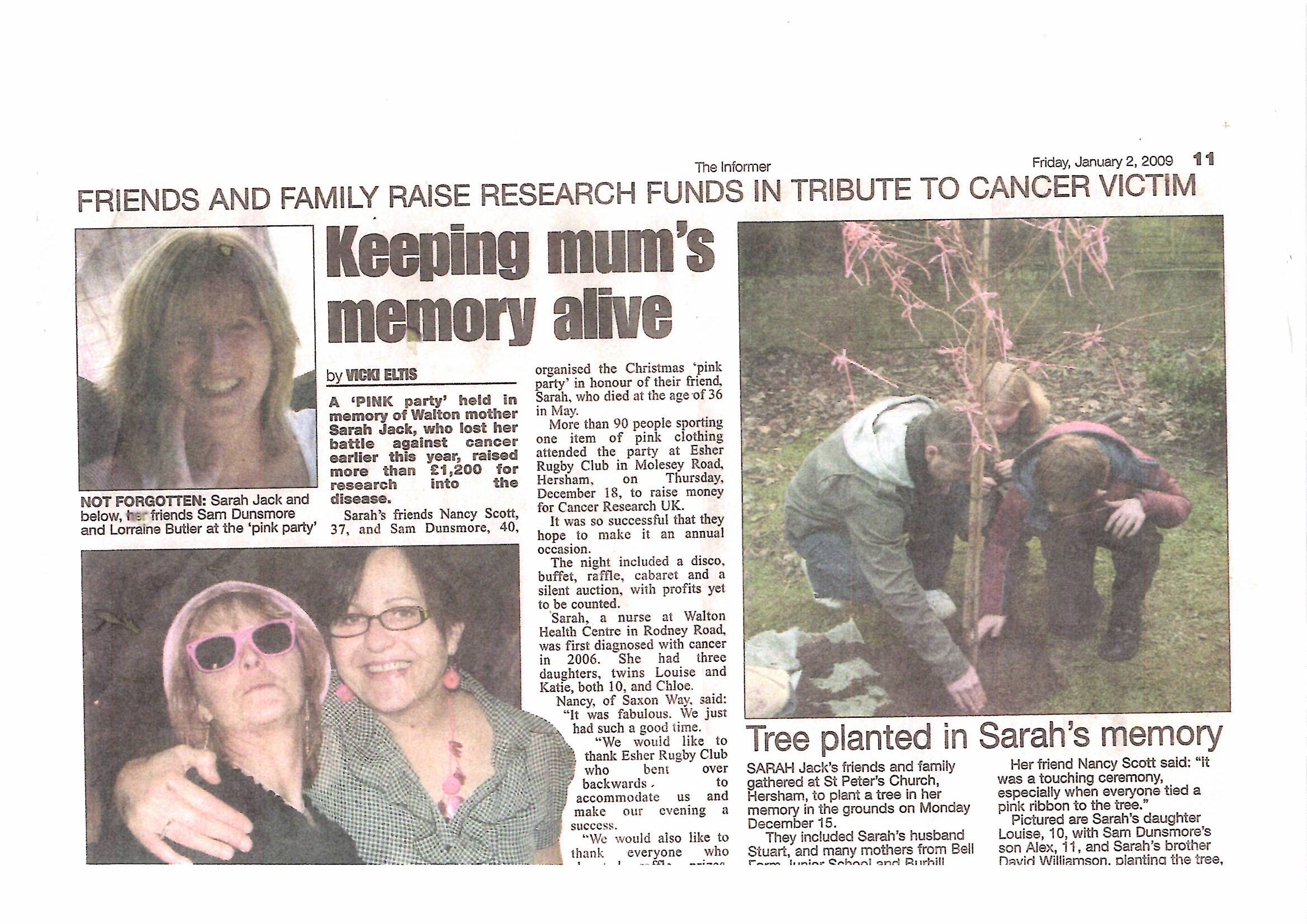 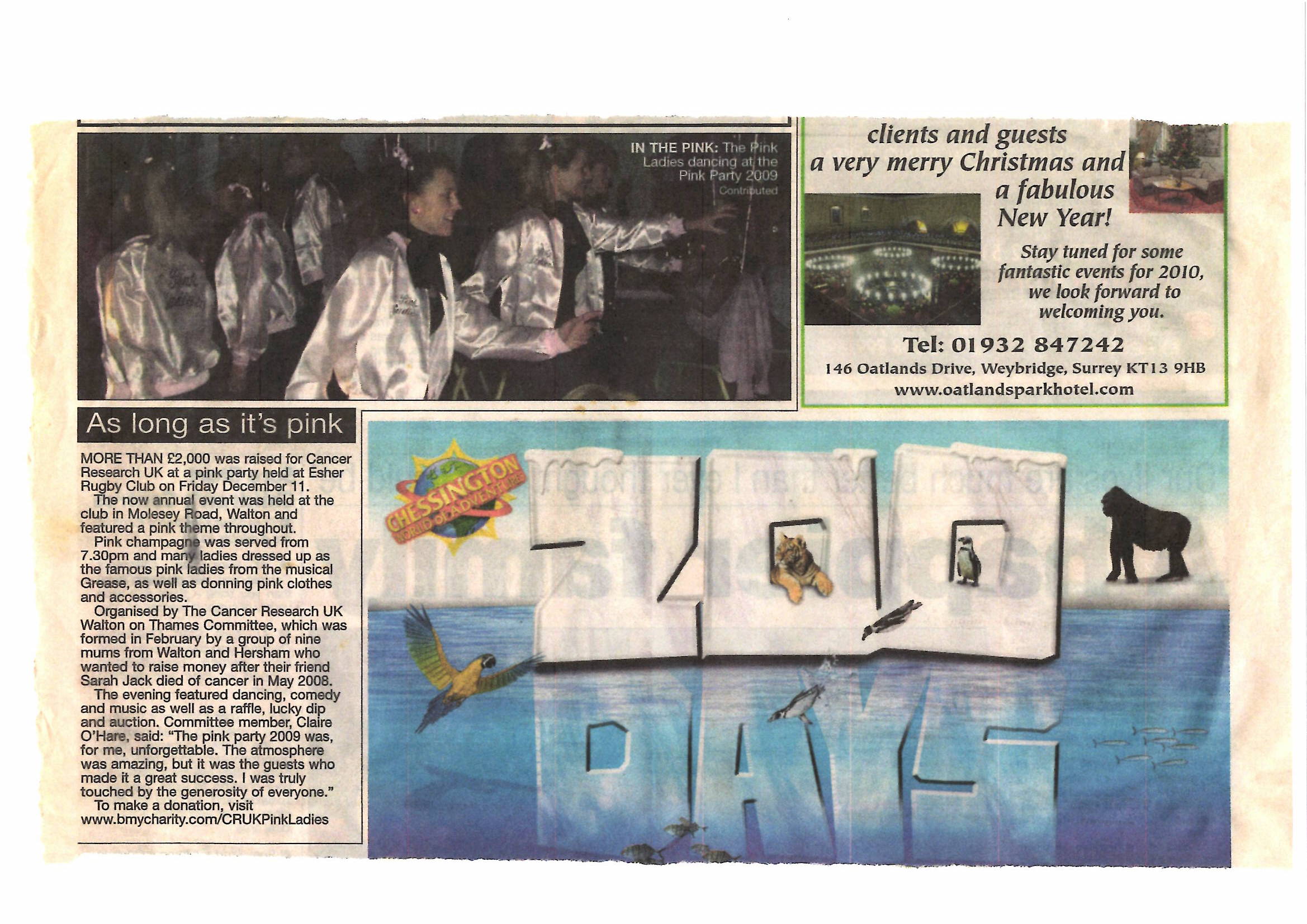 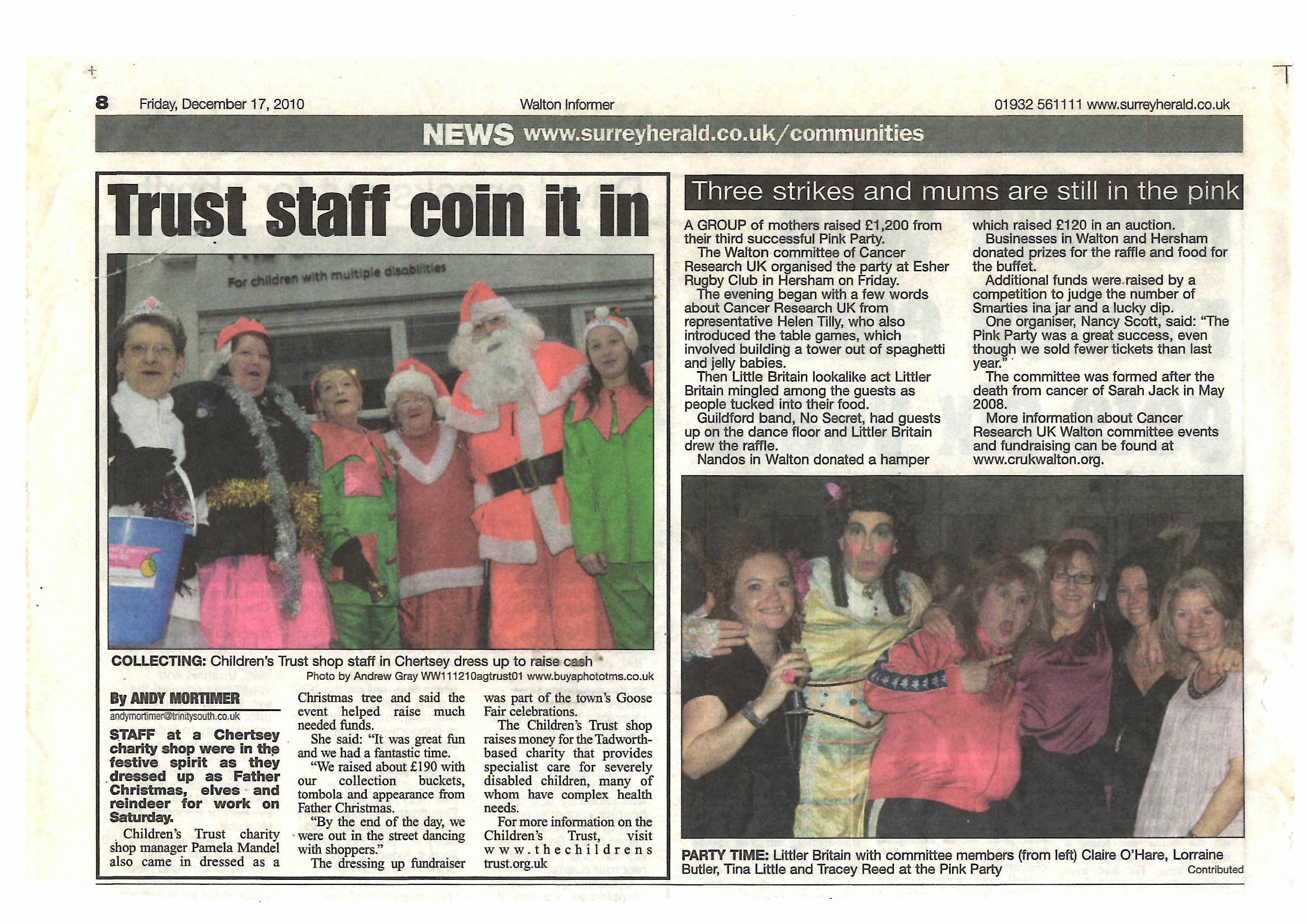 The idea behind Little Legs For LIfe – a much larger and somewhat complex project to put together – also invited interest from local newspapers:

Jun 30 2009 By Vicki Eltis, Surrey Herald LITTLE Legs For Life, a fundraising drive thought up by Walton mums when their sons said they wanted to help raise money for a friend who lost her battle with cancer, could become a national fundraising event after it netted over £10,000. Cancer Research UK has said it will consider rolling the event out across Britain after more than 250 children, from toddlers to teenagers, walked 5km at Esher Rugby Club, in Molesey Road, Hersham, on Sunday. The walk was in memory of Sarah Jack, a Walton mum, who died on May 31 last year, aged 36, from cancer of the liver and lungs. Her friends took part in the national Race for Life last year but their sons were disheartened they could not be involved in the women-only race.

So spurred on by their children, Sam Dunsmore, of Latton Close, and Nancy Scott, of Saxon Road, along with seven other mums, came up with the idea of Little Legs For Life. Emma Cronin, area volunteer manager for Cancer Research UK, Surrey, said: “Little Legs For Life was an absolutely phenomenal success. It is an amazing concept and one that could work in a lot of communities. “The work that has gone into it from the Walton committee is outstanding. We are very grateful to the community for the money raised and we look forward to getting involved next year.” Nine mums, Sam Dunsmore, Nancy Scott, Tracey Reed, Linda Miller, Claire O’Hare, Lorraine Butler, Tina Little, Sam King and Kate Wilson, formed a committee to stage Little Legs for Life. They now hope to repeat the event once a year. They spent several months organising the event so their boys could get involved and yesterday they said they will give ?10,000 to the charity. Sam Dunsmore, 40, of Latton Close, Walton, said: “We are so ecstatic it has raised this much. One thing we wanted from this was to make it a community event and it really was. “I am stunned at how much effort the children put in. They really did rise to the occasion with some exceeding the 10 laps. What a legacy and a testament this is to Sarah. I think she would be so proud.” Sarah’s husband Stuart said: “Although I had no direct involvement with the committee and the whole process, I am indebted to those who did and to parents whose children took part and made the effort. “I know, had she been here, Sarah would have been the first to put her name to such an event. It is a wonderful tribute to her memory. “The weather shone down on us and I’m pretty sure Sarah was smiling on us too.” All the children who took part were given a Waitrose goodie bag and a medal. Bell Farm School, in Hersham Road and Burhill Community School, in Pleasant Place, both Hersham, and Ashley School, in Ashley Road Walton, all actively promoted the race. The race was sponsored by Esher Rugby Club, Joanne Ward Dance Academy, Expressair and Waitrose in Hersham. Nancy added: “We would also like to thank Wendy Baker from Wendyhouse gym club who did our warm up, and Gavin Pomfret who did a wonderful job as our MC for the day.” 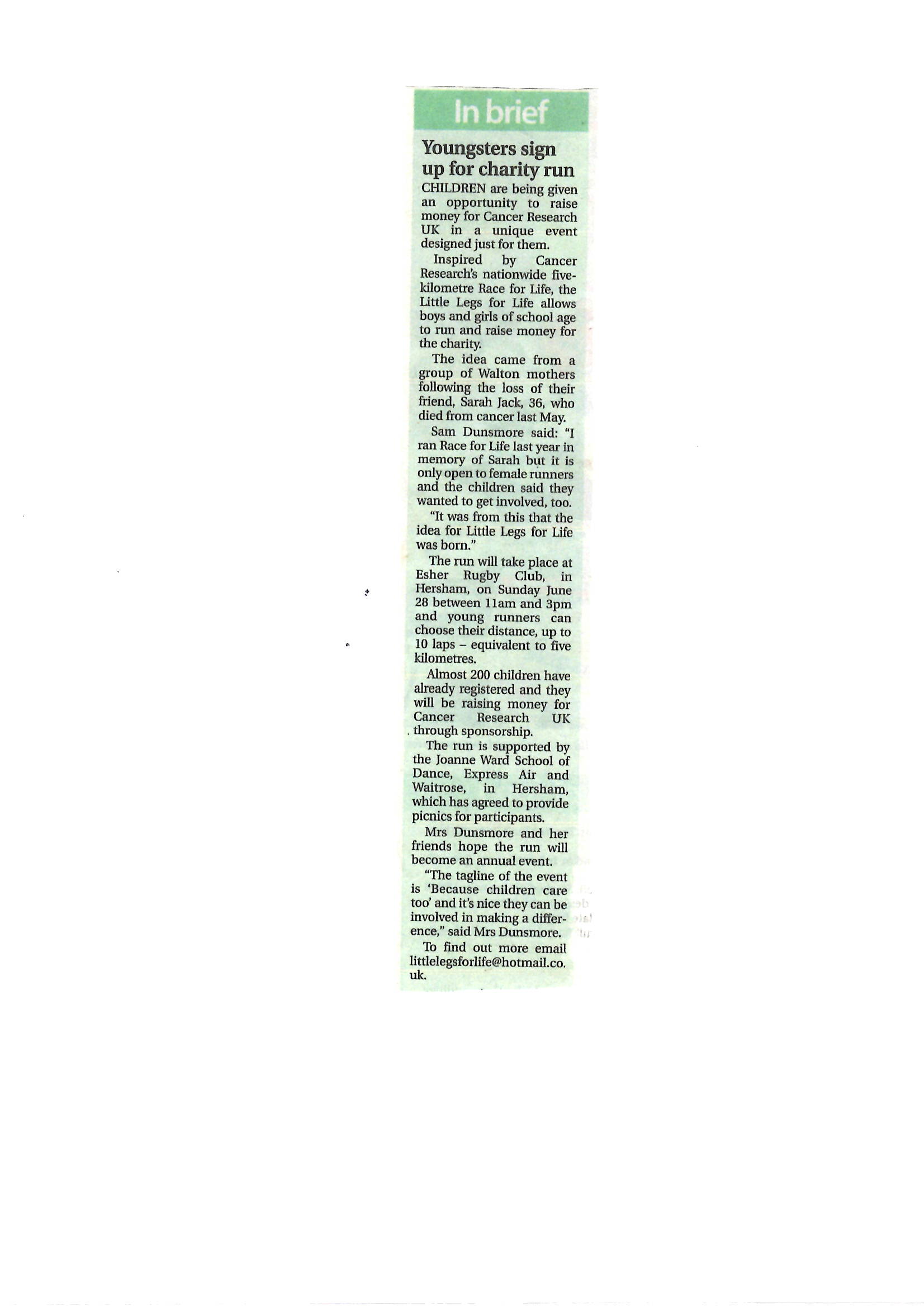 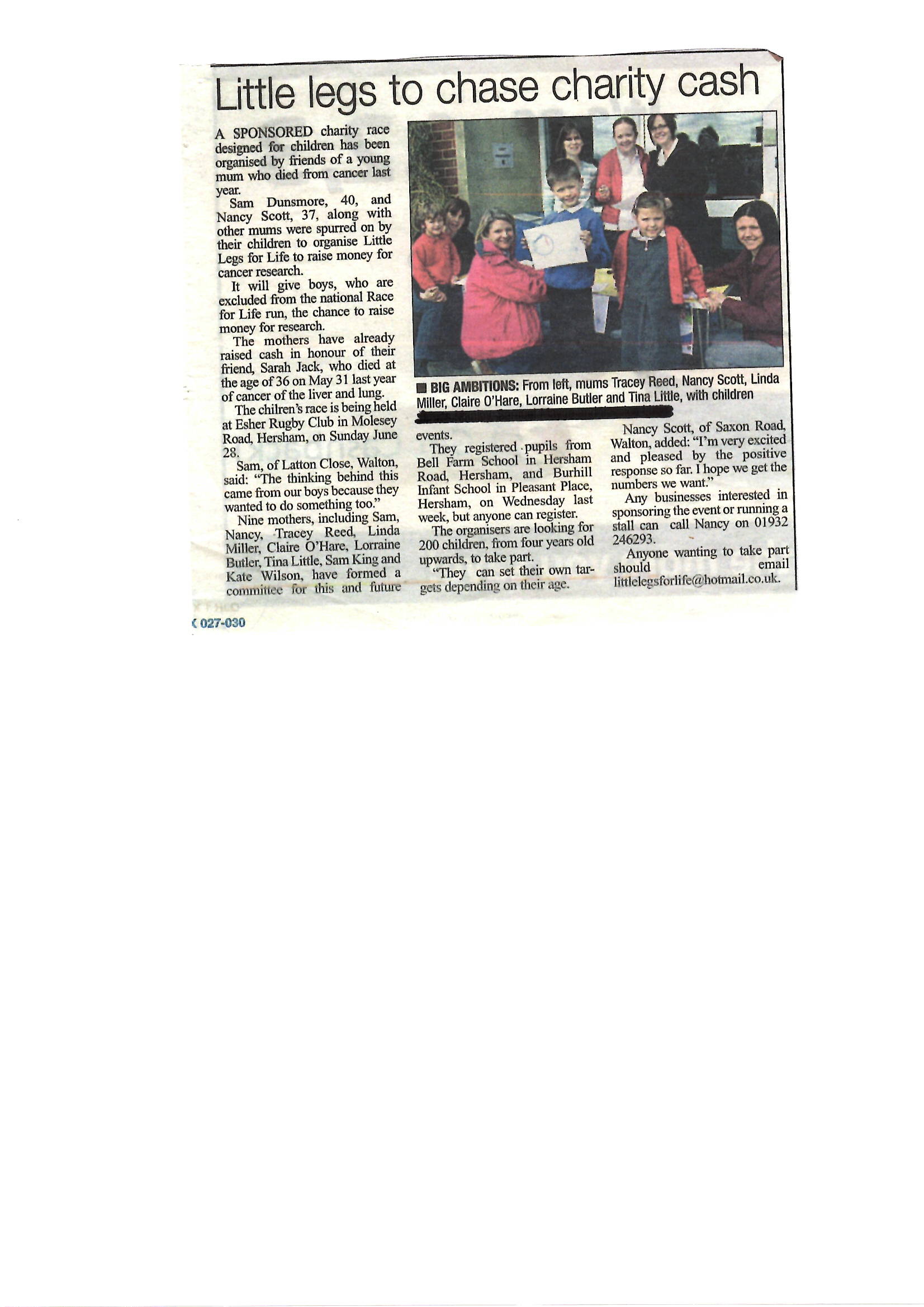 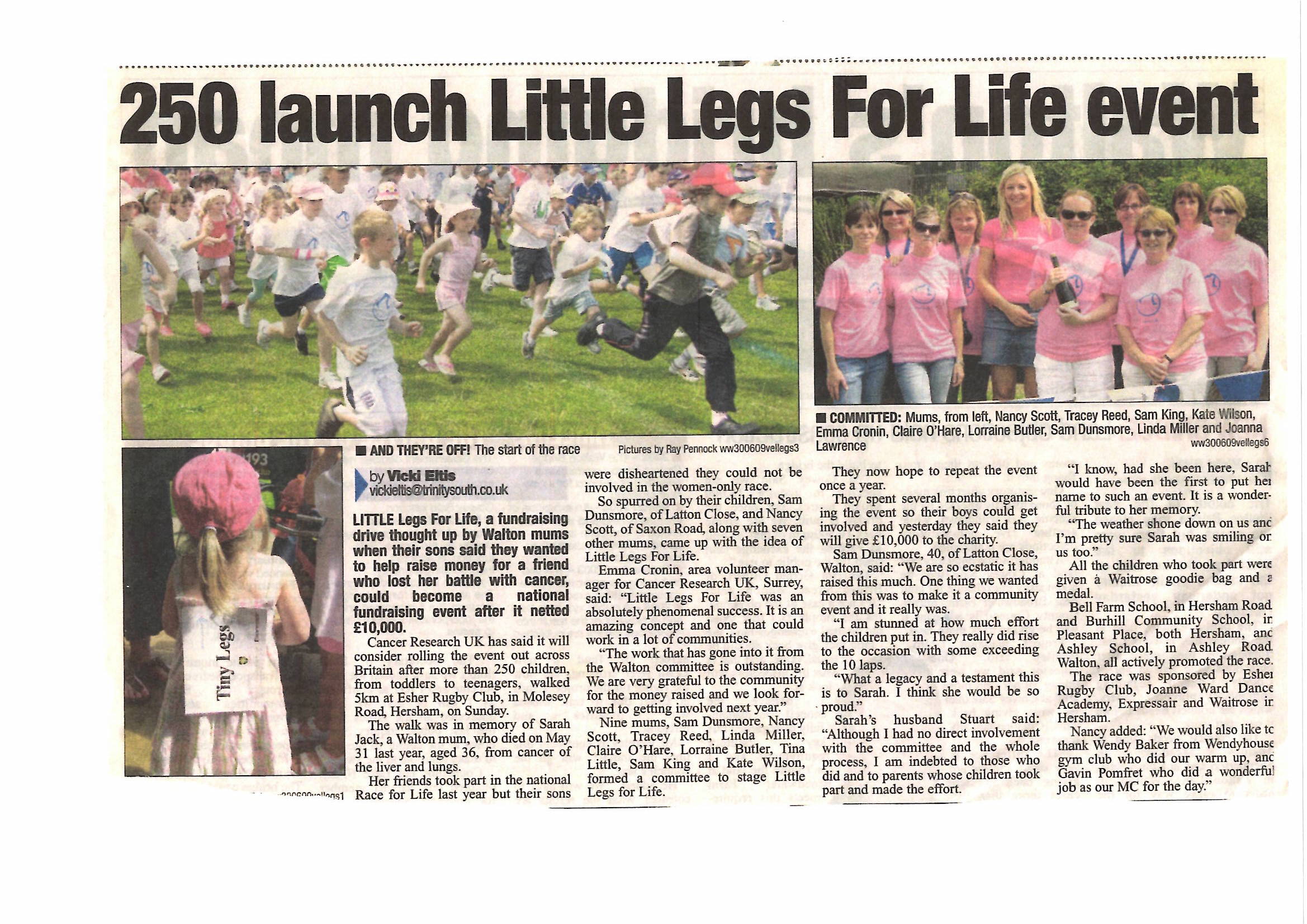 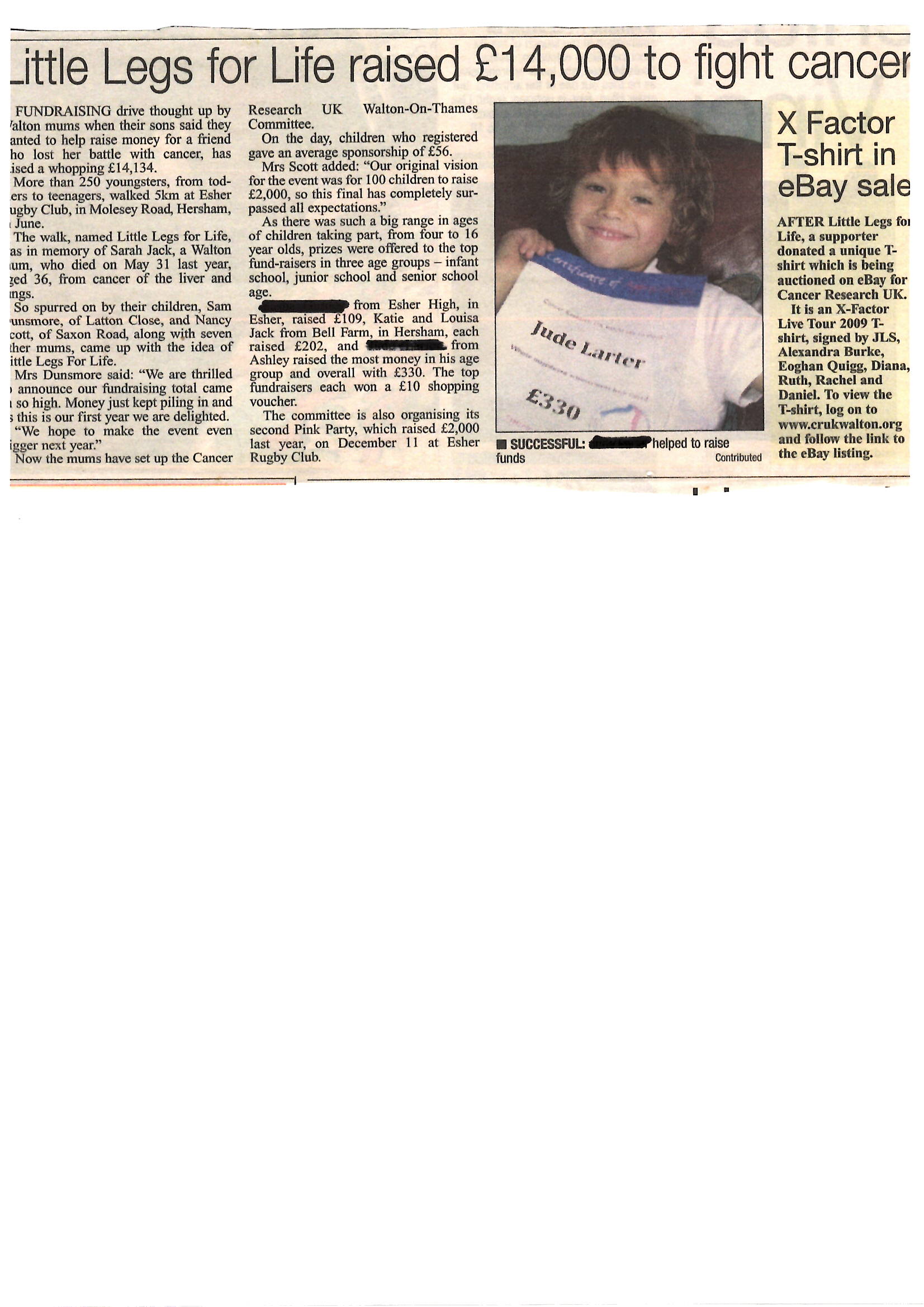 The second of these, and ultimately a more ambitious project, also received good media attention – and raised thousands….Cancer research UK became aware of the potential and took the project under its umbrella. The project was mooted to the rest of the country and a number of other committees were formed to raise the profile as a children’s event. A few months later at least 20 other versions of LLFL across the country were being organised to raise much needed cash in other local areas. However, back in Walton, the local event there attracted almost twice the number of participants as the first event. 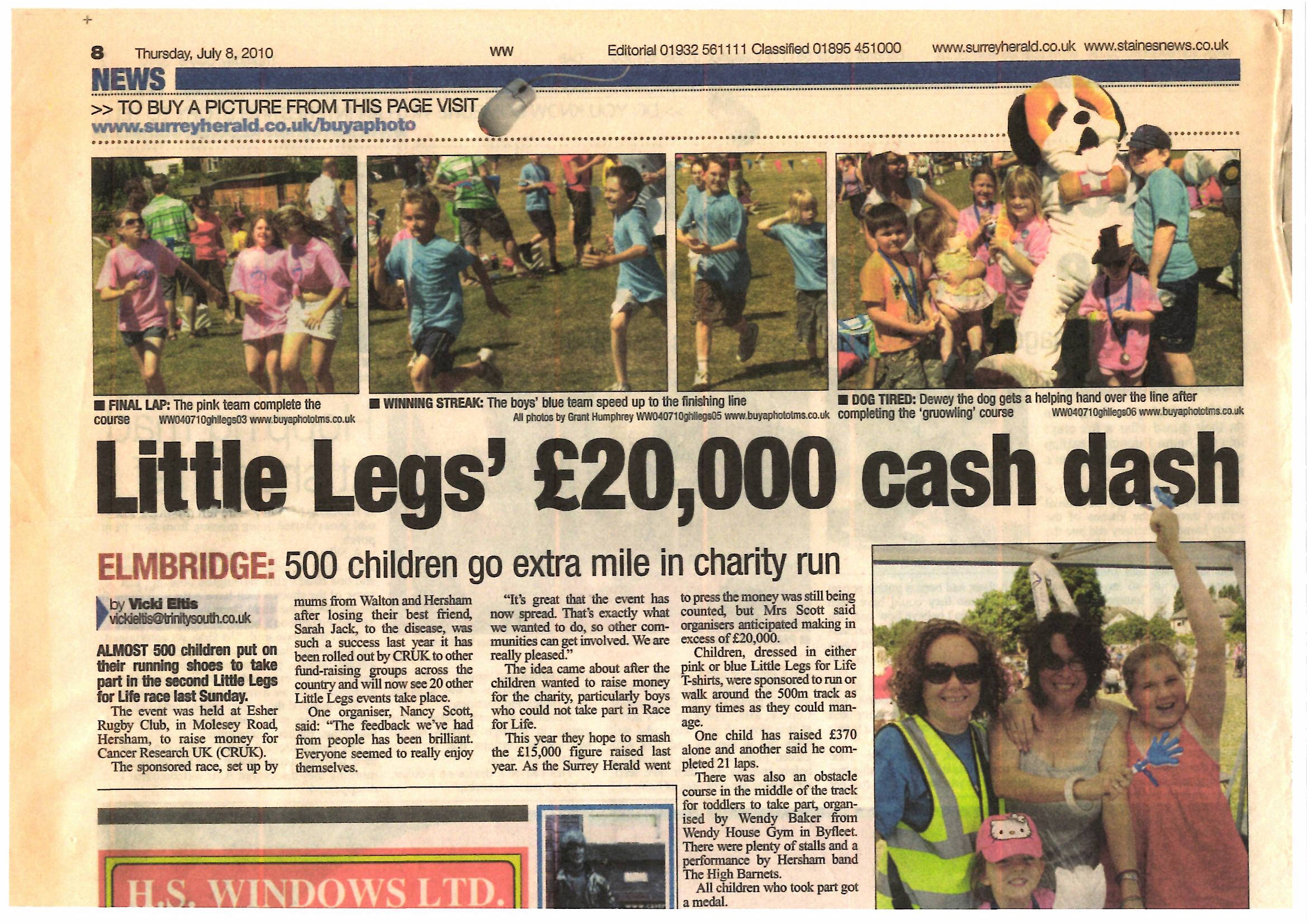 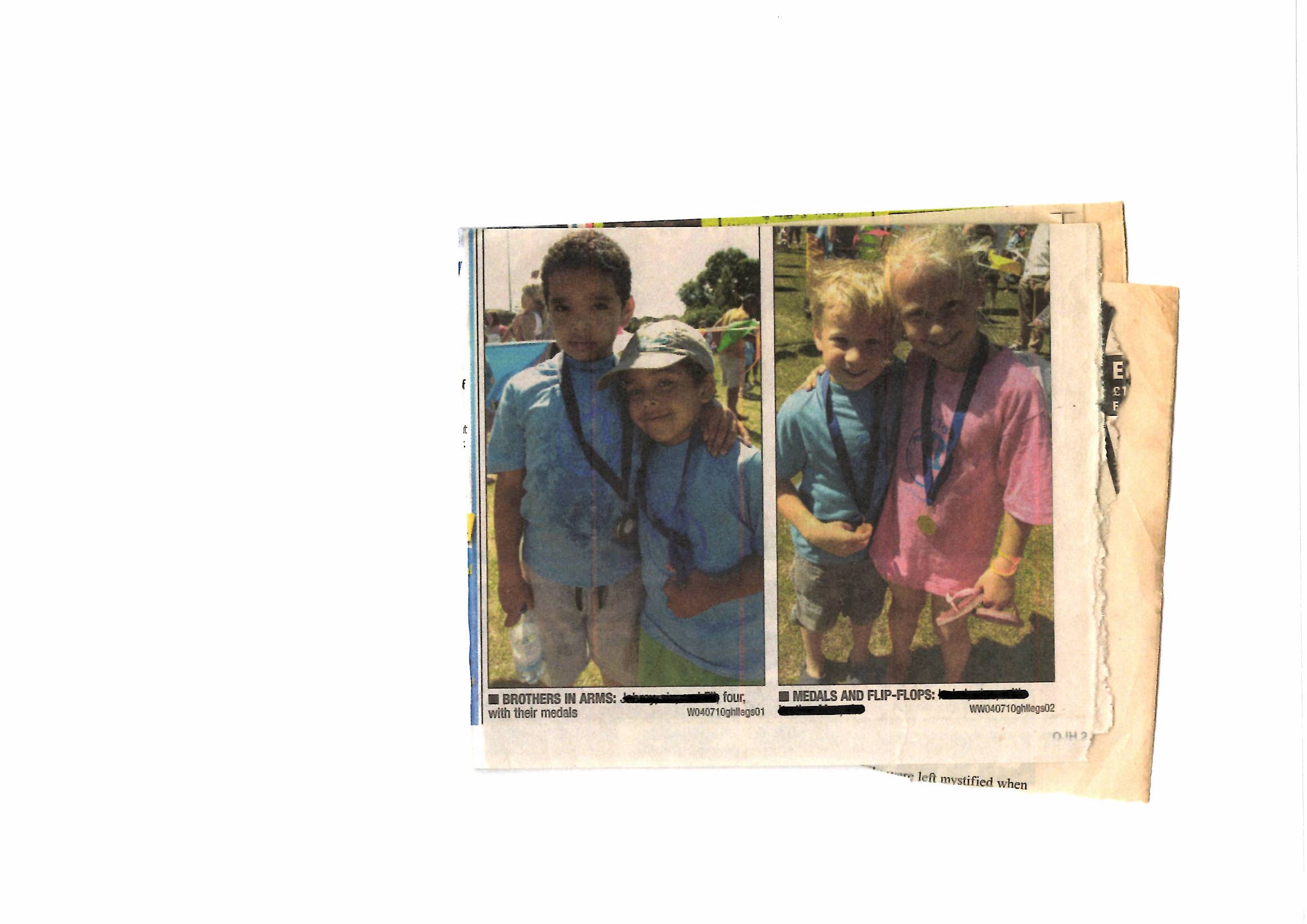 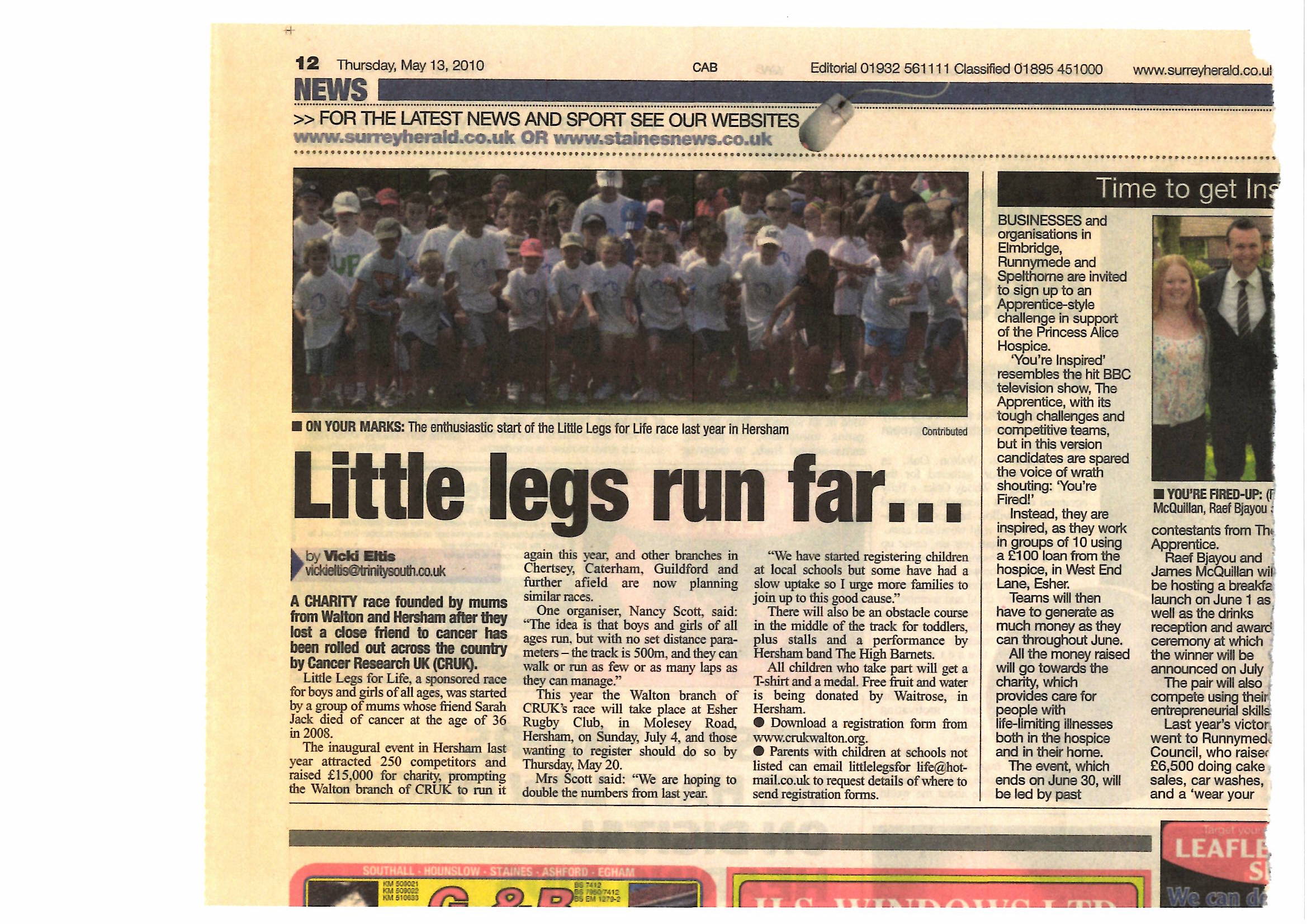 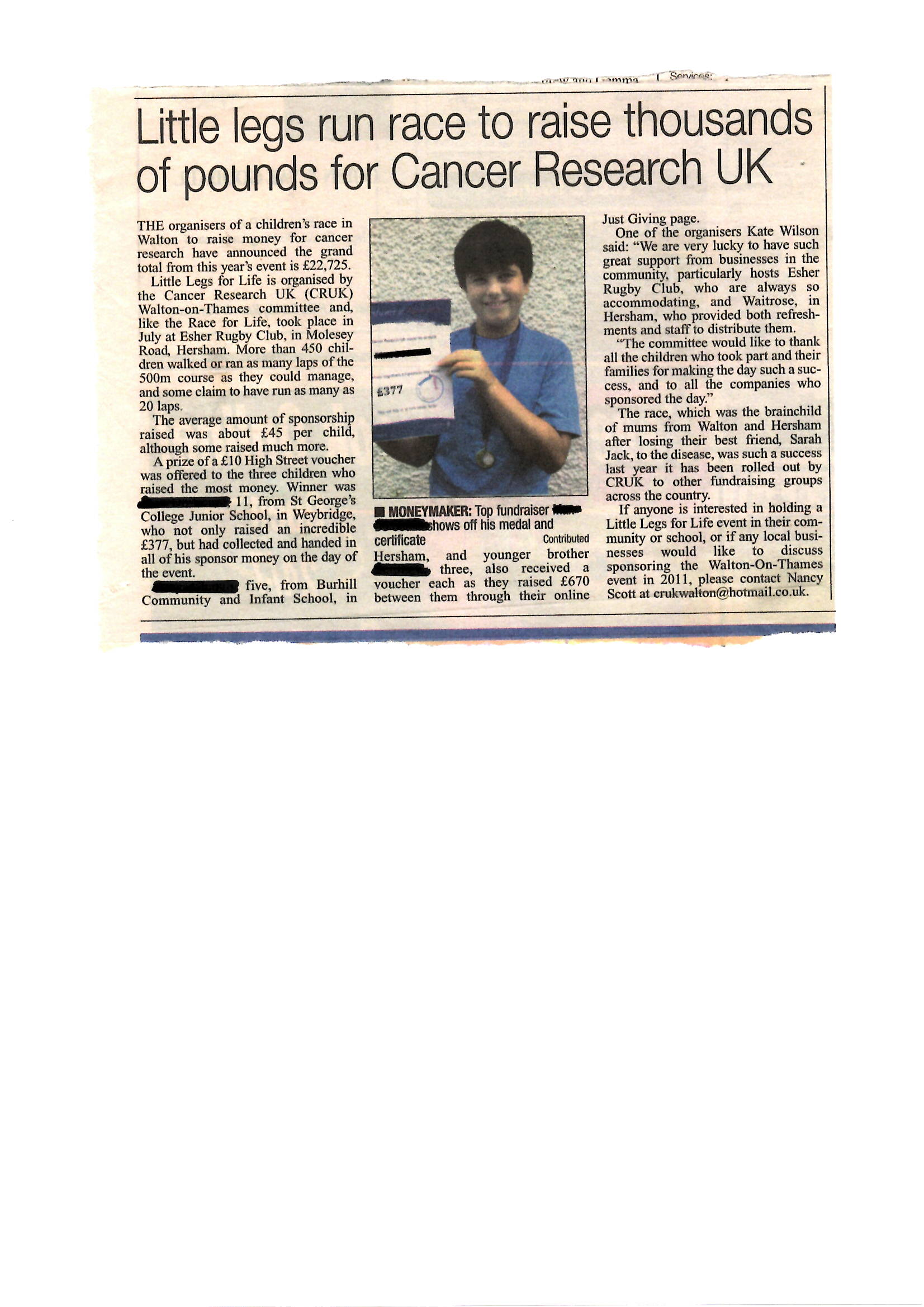 By 2011, the committee had made such a name for itself within the Cancer Research organisation that it was nominated by the local area representative to receive a Flame Of Hope award. This was duly carried and on Friday 10th June 2011, 2 days before the third LLFL event, the committee attended Russell Hotel in London to receive its coveted award. 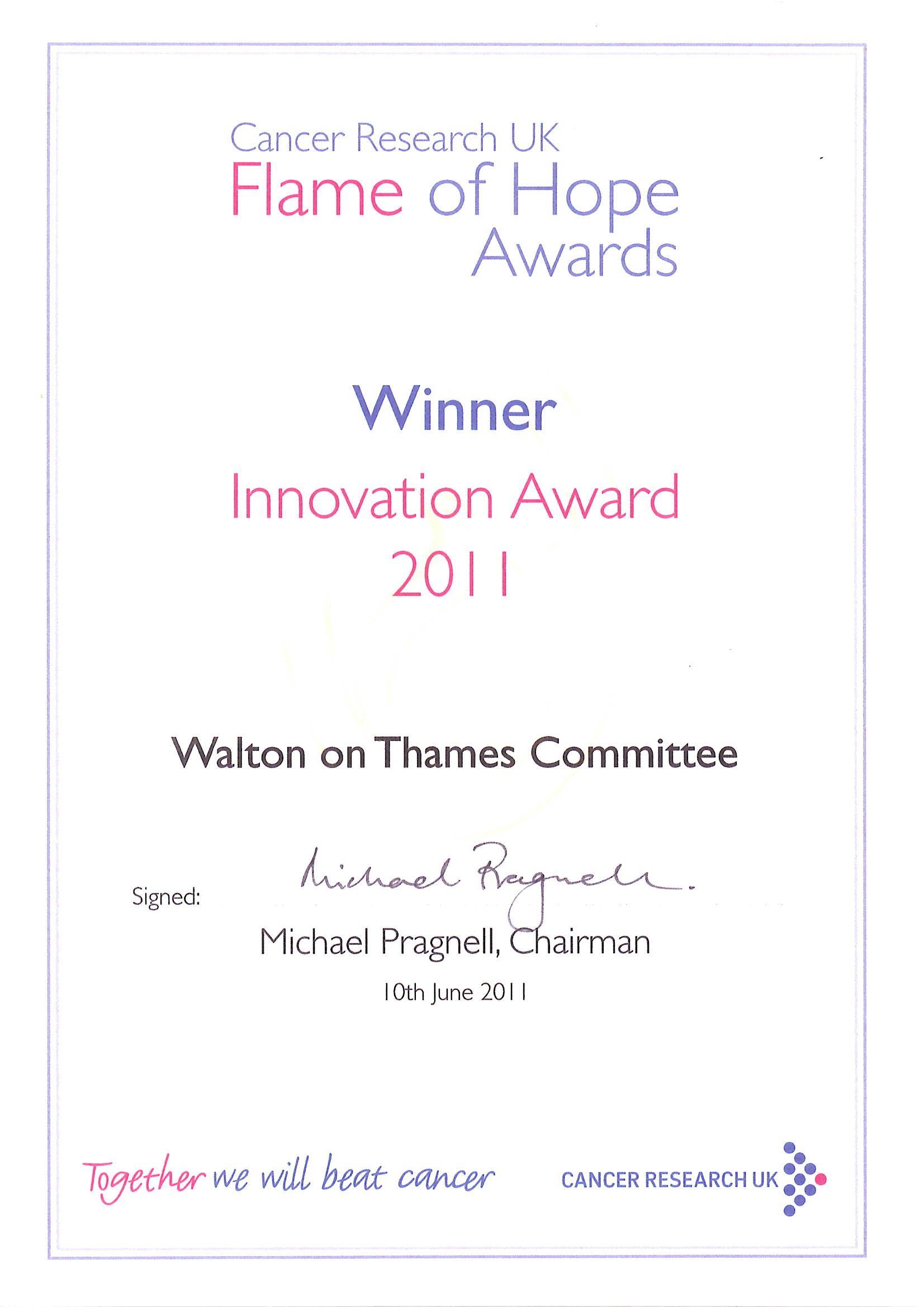 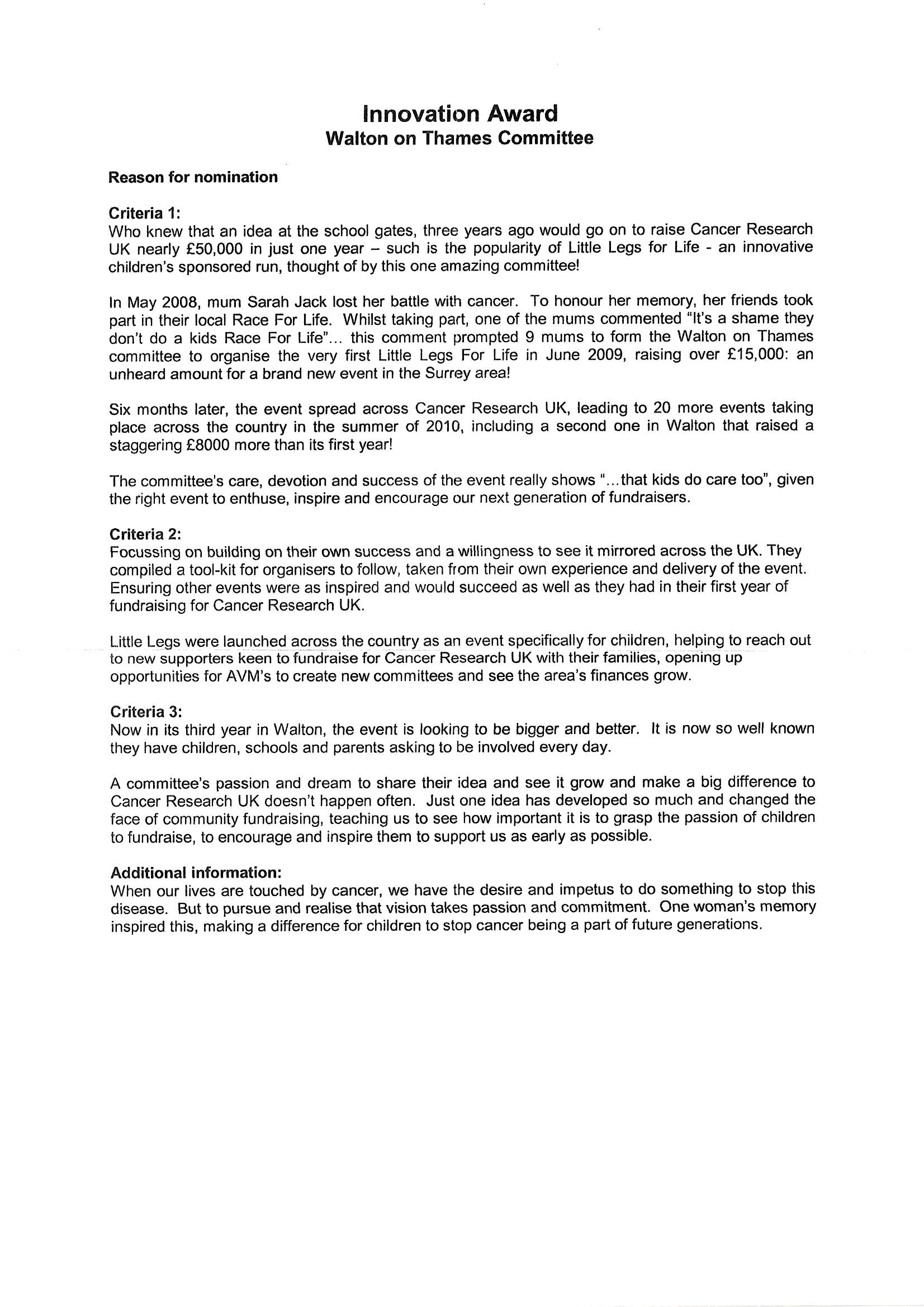 The 4th event took place on 1st July 2012. Boosted by the token gift scheme from Waitrose in Hersham, over 300 children managed to raise over £14,000. 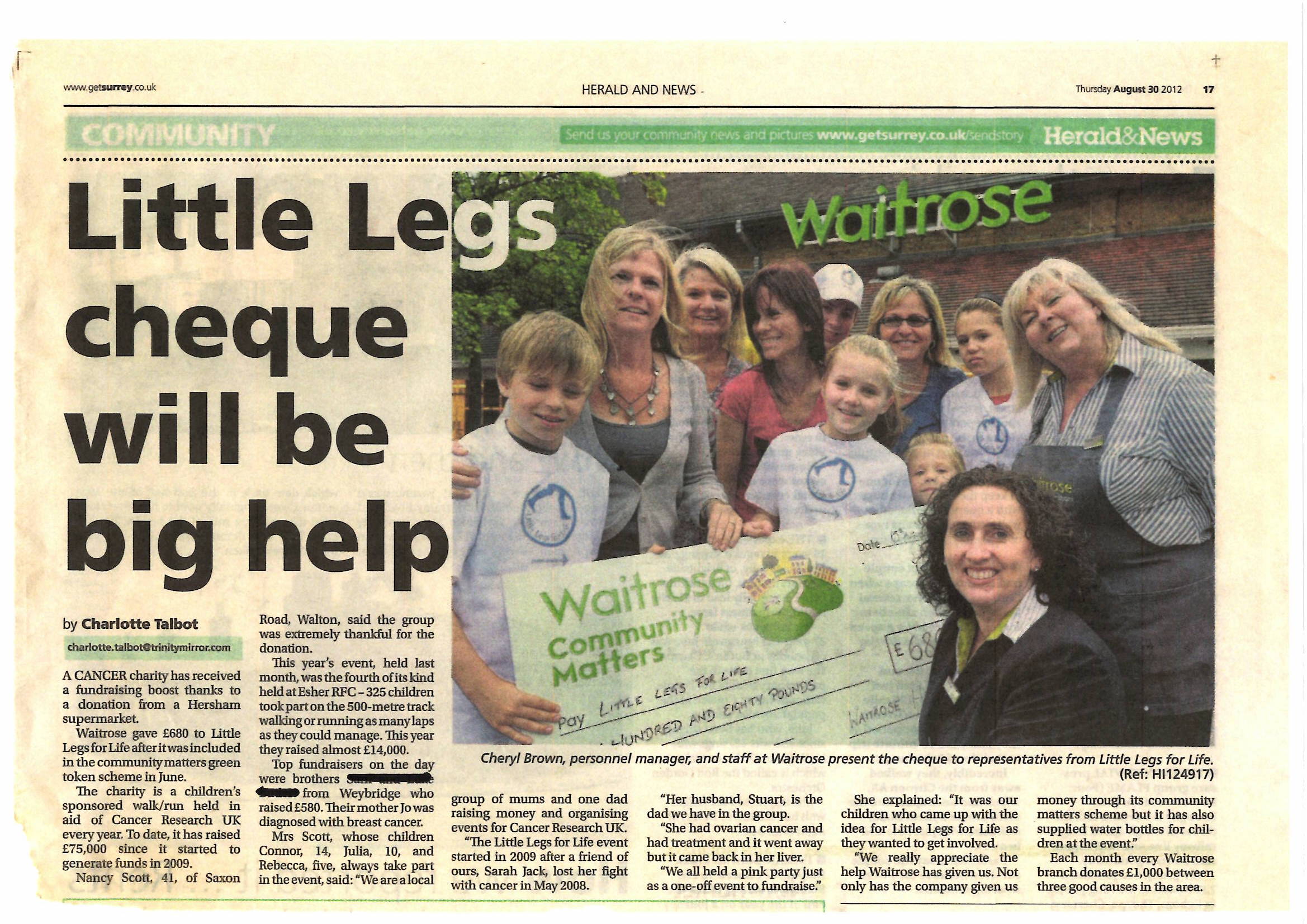 Once again in 2013, the 5th installment of LLFL, the local press promoted the event. Again the local support was generous. On the 8th of June 2013, over 300 children ran again and the total amount raised was in excess of £15,000. 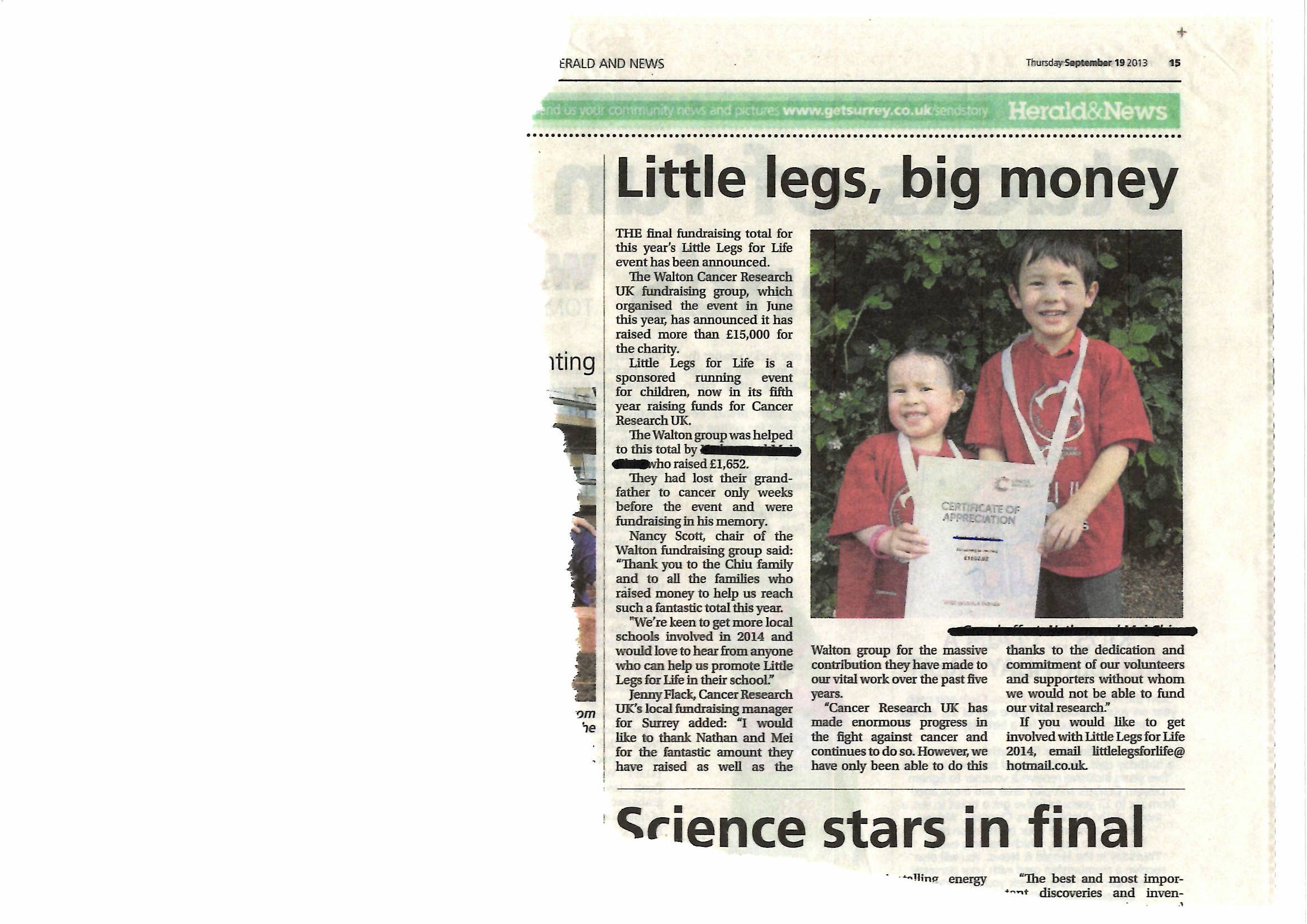 By 2014, and 6 events completed, the committee were once again recognised for raising a staggering £100,000 total with the combination of Pink Parties and Little Legs For Life events.